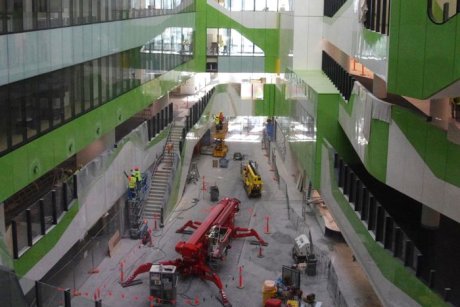 The news that test samples of installed roof panels in the beleaguered Perth Children's Hospital have come back positive for asbestos raises many issues. Before everything else, the health of workers is paramount. We can only imagine their anxiety living with the fear of possibly contracting an asbestos-related disease in the future. According to Shadow Health Minister, Roger Cook, the PCH is effectively a contaminated site.

But there are other concerns.

Concerns that stem from outsourcing and privatisation. Concerns that arise when government projects important cheap overseas manufactured goods instead of looking to see if those goods can be produced locally, supporting local businesses & creating jobs for Australians.

The CFMEU raised the alarm about the materials yesterday. Initial tests conducted by the union show that asbestos was present. After more tests, Health Minister, John Day has now confirmed those findings.

And now starts the "blame game". The State Government engaged John Holland Construction. John Holland subcontracted a supply company called Yuanda. Yuanda sourced the materials from China. An initial sample of the roof panels did pass Australian standards. But that test was conducted three years ago. A lot can change in three years, including, apparently, the ownership of the Chinese supplier.

It's also been reported that Yuanda supplied materials for Fiona Stanley Hospital and the Perth Stadium. Both sites will also be tested for asbestos.

The Premier has stated that "John Holland would struggle to win other Government contracts." He is right about that. However, is that enough?

And where does that leave us?

We have an as-yet uncompleted children's hospital with a litany of mishaps attached to its construction. Apart from this latest disaster, it's been reported that:

And possible contamination at other John Holland projects, one a fully-operational hospital.

But all of these issues, while adding to delays and embarrassing the government and John Holland, are fixable. Costly, but fixable.

This latest is not. The latest may affect the lives of workers if not discovered by the CFMEU.  It is indicative of a much bigger problem - one that occurs when oversight is faulty and the cheap buck is sought.

Privatisation doesn't work. When profits are the motivator, short cuts are taken. And people's lives are put at risk.