Most of our data on the impact of electricity privitisation comes from the experience of the eastern states of Australia.  Competition policy began to rollout from the mid-1990’s and this included the establishment of the National Electricity Market for the sale of electricity.

Western Australia is not part of the National Electricity Market for the simple reason that stringing an electricity wire across the Nullarbor is not feasible.  The construction would cost a very great deal, and in transmitting electricity, electricity itself is lost.  A lot of electricity would be lost when transmitting that far. In part, this is Western Power describes itself as a natural monopoly and, of course, that makes Western Power of interest to private companies.

Prof John Quiggin, in a submission to a recent NSW Parliamentary Inquiry into electricity privatisation noted as follows:

“…the lowest prices were in Queensland, under public ownership, and the highest in South Australia under privatisation. It is important not to overstate the significance of these differences. The overwhelming factor driving higher electricity prices in Australia has not been privatisation per se but the failure of the National Electricity Market. However, the designers of the market relied heavily on the assumption that the process of ‘reform’ would eventually culminate in privatisation, and that competition between private firms would drive prices down. Of course, the opposite has happened, as can be seen.” 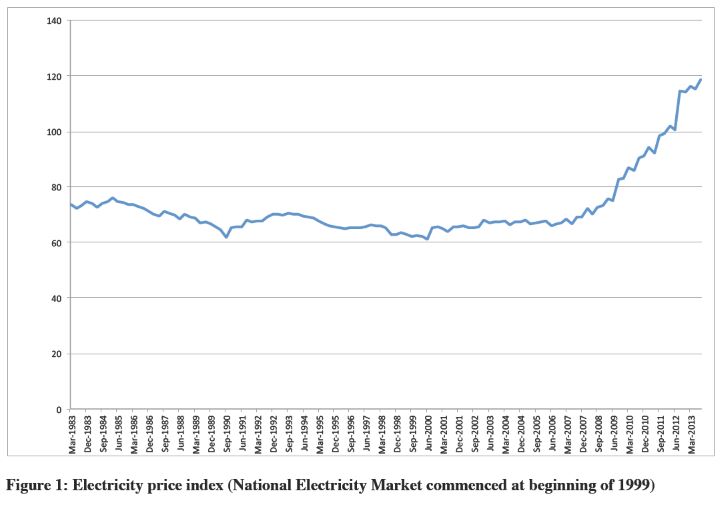 For the record, in the latest year available and used by Prof Quggin for this chart, 2012/13, the typical cost of electricity in WA, where our network is publicly owned, was at 25 cents per kilowatt hour (only slightly above the 23.7 c/kWh of Queensland’s publicly-owned electricity) and well below the cost of privatised electricity in Victoria (27.66 c/kWh) and South Australia (31.27 c/kWh).

WANT TO FIND OUR MORE OR MAKE A DIFFERENCE?  CLICK HERE.